"Ready for the big day?" Jack mutters walking alone to the local strip mall, as if on a reconnaissance mission, scouting the streets before reporting back to Darius at the HQ, and before the Zombie Hunters' flyers were to go viral.

This totalitarian environment seemed to have been creeping up on us. And not only regarding the Coronavirus  madness. The Neo-Soviets, riding the Covid era, are trying once again to rewrite History.

Jack read an article recently stating that the football team Redskins, is changing its name. After decades of existence. Apparently “Redskins” is considered a racist name. The team's symbol is also going to be changed.

“Why is the native american reference, regarding the Redskins, considered racist?

Why isn't the Democrat Party abolished? Are you believing that political wolves parading in sheep's clothing will not lead us astray...?”

As Jack's mind interconnected more dots, he thought of something even creepier... the so-called anti-racists are precisely the ones who have, buried in their subconscious, some kind of self-hating racism.

"If systemic racism exists, why is the Democrat Party never blamed for it? After all, their party created many of the racist policies that still exist today.

Because in practical terms, what they consider “Racist”, is to just make any sort of reference to some existing culture and ethnicity. The “Black Lives Matter” movement, in conclusion, just doesn't want to be remembered for how conceptually racist they are.

“No contemporary Scandinavian feels insulted when they call him a Viking. Which were quite barbaric and aggressive. So, why is it an insult to remember other ancient non-European cultures on a Football team? For sure the Minnesota Vikings, whose symbol is a blond Scandinavian aren't going to be accused of the same thing by Northern Europeans...”
This is the terrifying truth. Often, things are not what they seem...

But Jack's mind and concerns for the moment are turning back to the masks.

He walks up to the supermarket entrance, where people are waiting to go inside, and to do their shopping.

Jack is not wearing a mask. And he wasn't planning on going to the supermarket.

Although, even among the “masked” people, there seems to be a... black sheep.

Soon enough, Jack notices there is something causing commotion and trouble inside the supermarket. He sees and listens, barely, through the windows, a group of people raising their arms and voices.

The masked clients, outside, keep walking inside the store.

Jack, not caring about his “naked maskless” face, goes inside as well.

He needs to see what is going on.
Inside, there is an outraged masked mob. And the supermarket's security guard doesn't seem to be able to control the situation.

Jack approaches the chaotic gathering. And Jack grins, as he sees one customer, dressed with a “Grim Reaper” Halloween mask. He is surrounded by everyone else. And he is trying to make his point:

But... let's be rational. I am required to wear a mask to be inside the store, right? - he says to the guard, and to the hysterical people around him. - So, I am wearing a mask! Plus, my mask covers the entire head! Except for the holes for the eyes. All the air comes in, and goes out through here. My mask is a lot more protective than all of your masks. And my face cannot be seen by the security cameras, it's true. But yours cannot, also. So, what is the problem? Why can't I go in? Plus, I also want to remind you that, with your hysterical attitude, you are breaking the “social distance” rule. Or are there good and bad “Covid-19 prevention rules?”

The “Grim Reaper” is making great points. And the security guard, trapped in his mental numbness, is not able to reply with reason. And so, he answers:

The mob applauds these words. As if they accept the orders coming from above.

"Excuse me... I was listening to your conversation. But, are you, American Citizens, wearing masks because you want to be protected, and protect the others, or because you are being told to wear these particular types of masks? Isn't the whole idea to protect ourselves from the virus? Rather than to follow some kind of cult initiation ritual?"

The “Grim Reaper” replies, politely, and says his name. "Nick. Nice to meet you."

"Absolutely." - says Nick. - "My good people... all studies deny the effectiveness of your masks. In fact, they bring health problems to those wearing them. You can't breathe properly. Children, throughout the world, have died while wearing them. Because of them! And even the Establishment propaganda admits that the masks cause skin problems, as well. It even has a name, now. “Maskne!” You don't get it, do you? I'm sending a message, by wearing this “Grim Reaper” mask."

The Zombie Makers are even proudly naming the new health problems that are caused by the mask! “Maskne!” At least they don't try to hide how amusing they are by playing you like boarding chess!
There is a glimpse in which the mob seems to try to enter the world of reason... As if a survival instinct kicked in. But it didn't take too long before they realize Jack is a “Covid-19 infidel”, because he is not wearing any mask.

But Jack, desperately, tries to fight the Zombies with facts.

Deep inside, you have to understand this! The Pharmaceutical Companies are selling you antidepressant drugs, - even more than the usual - because of this whole insanity. You are taught to look alike, to lose your individuality, through these masks. In the future, what are the limits? Will you be forced to get a “vaccine”? Against a virus that, save a few exceptions, only affects people who were already ill? Or are old? And after the Coronavirus experience?

What other masks and vaccines and repressive changes are you willing to accept? Wake up, while you still have time!

The hostility became stronger against Jack. And easier. Because he fit the profile...

He is not wearing a mask. Hence, he does not fit in the Zombie club... Totalitarian regimes are also known to be very aggressive – even deadly - towards those who don't fit in the club... 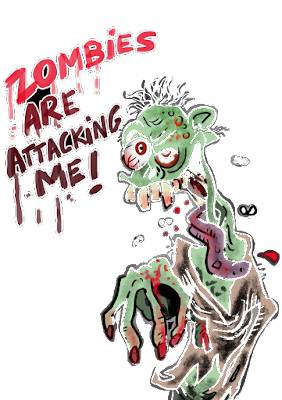 Hey, why are you even talking?! - a “Zombie” shouts at Jack. - Another privileged non binary male, who is not even wearing his mask! Get the hell out of here!

The mob starts becoming angry... Both at Jack and Nick. The supermarket security guard pretends he isn't seeing it, and goes back inside...

Ok, this is getting crazy... literally... Should we get the hell out of here? I mean, run for it?

Yes for the first one: Getting the hell out of here seems like a good idea. But we can walk casually. We did nothing wrong. Watch your back.

Jack and Nick are strolling away from the supermarket. Nick already took off his Grim Reaper gear. They are both out, back in parking lot and look back.

The masked mob however, followed them outside.

Hey... looking behind... they are still walking in our direction... - Nick warns Jack.

So it seems... But there is no reason for us to worry. Look at them! Their faces are already becoming beet red! They can't even breathe properly. It's too hot outside for them to try to play catch with us. Not with those masks, at least.

And indeed, Jack and Nick try to hold back cracking up while the masked mob goes back inside the store, to the comfort provided by the air conditioning.

Thanks, man... For supporting me back there. Things are really going out of control. - Nick says. - I thought my funny idea was a good way to show these imbeciles what is happening. How ridiculous is the hole they are falling in.

It was a good idea, actually. Say, Nick... How would you like to become a Zombie Hunter? I think Darius and my other friends would like to meet you...

The Globalist Regime out there, is here.   Is our Freedom already gone? Is Democracy already dead? Those who are willing to become slaves, because of a false sense of security, in the long term, they should never be able vote.  And this is what is happening. Democracy should be about those who understand it. Those who want to be Free.  Totalitarian regimes only exist, because there are always people who want to serve them. People who don’t want to be free, themselves. Look up History. Now Look at America in 2021. This should not be America.  Tyranny is a revolt against those who still have intelligence. And dignity. Let’s face it. Many individuals couldn’t care less about those core values. And these aren’t even’t revolutionary statements. Even Pop Culture, in movies like “Seven” displayed this same reality. Or well known and well educated series like the “X-Files.” It seems like 90% of people are  moronic imbeciles ? And the remaining 10 % are in serious danger of being infected b
Read more